Pentecostal Newspapers: Messengers of an Outpouring

This book is 95% direct quotes found in Pentecostal newspapers of the early 20th century outpouring. It contains a history of the outpouring that was written by those who participated in it. A normal history book is only a survey of events that happened way back when, but the articles in this book, taken from several different papers, were written by people who were either eyewitnesses or participants.

The history does not begin with Azusa, but goes back farther, showing the fertile ground that God prepared to bring forth the bountiful crop of the outpouring. Many people do not realize that God prepared the Holiness movement to play a major part in the last days outpouring, as many of them, but far from all, receive gift of 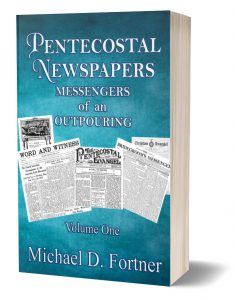 While reading these stories of healing, miracle provision, and divine intervention, you will laugh, cry, shout, and be amazed. God truly worked signs and wonders among Pentecostal people and ministers all over the world, not just a few big named ministers.

These articles show that divine healing existed before the Pentecostal outpouring, as it was part of the Holiness Movement. When a backwoods preacher prayed for a smashed elbow, those present could hear the bones snapping into place; and this was before Charles Parham and Azusa Street. Nor was Parham the first preacher who spoke in tongues. On the day the Holy Spirit fell on the West Coast, a Pentecostal convention was being held on the East Coast of the US, and it was not the first (these spoke unknown tongues. There was another group that called themselves Pentecostal in the late 1800s because they believed they had the Holy Ghost, but they did not speak in tongues).

The above is just part of the real history of the outpouring that is revealed in the Pentecostal newspapers. They also show how it spread into different cities and nations all over the world. The Weekly Evangel, was is the paper of the Assembly of God (and became The Pentecostal Evangel), collected a history of the movement which it published in a series of articles in 1916. They asked people to write what they knew, and many sent in their stories.

The editor used some of the articles in his book, Apostolic Faith Restored, (1916). But the paper continued to publish more such articles, and I found similar articles in other papers that provide even more history.

After the history, I give many articles with testimonies of healings, baptisms in the Holy Spirit, revivals that took place, including a few inspiring stories of hero missionaries. You will read the firsthand accounts of how God answered prayer in miraculous ways, over and over again. These stories will inspire and build your faith.

Individuals give their testimonies of how they hungered for more of God, and sought Him until they finally got the baptism in the Holy Spirit. Some of these people got their Pentecost in a campmeeting, or a revival church, but some received at home alone with God. This is yet another factor that proves false, the claim that Charles Parham started the movement, and that everyone that spoke in tongues in those years got it from him or someone he laid hands on. Once people heard it was available, many people sought it and got direct from God!

These historically significant stories give many more details than you will learn from reading the usual summary-type history of the movement. However, because it is only the words of the articles found in the newspapers, it is not and cannot be a comprehensive history. I am sure many details will be left out, especially since I only use papers from 1906 through 1923.

Occasionally I will give some clarifying details to help the reader have a more complete picture of the movement, or sometimes just to clarify the information given. Many of the articles were written by people who were not trained writers, so sometimes I include a word or sentence of my own in brackets [ ] giving more detail or explanation, or even a whole paragraph after the notice: Book Editor.

However, these bracket ( ) inside a paragraph are original to the text. When the word “wrought” appeared I just removed it and put the correct modern word, which is usually “worked.” There are also many paragraphs that were as long as the page, so I simply found good places to create a paragraph without making any actual changes in the text.

Many early 20th century Pentecostal missionaries went to China, India, Africa, and South America, all without knowing they would get a dime in support. They were called Faith Missionaries, yet, many were successful. One lady and her husband went three years without so much as a letter or a dollar from home; when the husband died she made a trip from the heart of Africa to Chicago with virtually no money, God providing for her every step of the way.

You will read about other great heroes of faith, yet who are unknown today, such as the preacher who took his family by train to another city without a cent in his pocket, even for train fare; God provided everything as he went. He then began a new revival and was able to build a new church that was paid for in one year. These heroes did not just take great risks on blind faith, they were following God’s specific instructions.

You will not only read about the victories, but the troubles and the struggles. Some ministers were beaten, arrested and put on trial; dynamite was put under a church in an attempt to explode it. One fellow claimed to have been born blind and then claimed a great creative miracle of new eyeballs and received much attention for his claim, but it was shown he lied, which brought charges of fraud to the work of divine healing.

These papers existed long before there were any Pentecostal denominations. Each paper contains many reports of revival meetings all across the nation, but I only include a few as representative examples. You would need to take the reports of revivals and campmeetings and multiple them by 10 or 100 to get the true number, as they did not publish a notice about every single revival in the nation.

Several times you will read about a “heavenly choir,” which does NOT refer to a wonderful sounding normal choir, but one of the manifestations of the Holy Spirit in that age. The Holy Spirit would move upon many people at the same time to sing in unknown tongues; they would of course sing the same original Holy Ghost written tune. And the majority of the people singing could not in their real human ability even sing well. But this heavenly choir was truly angelic. The manifestation continued at least into the 1940s, because I heard Oral Roberts tell of sitting with his wife in a tent meeting and they both became part of such a choir. Sadly, this manifestation no longer is present in any Pentecostal or Charismatic churches; see if you can figure out why, while reading this book.

This book only contains a few articles that could be considered doctrinal related, and only one specific Bible teaching article, as good as many of them are; this book mainly contains what can be classified as eyewitness reports and personal testimonies of what God was doing among the Pentecostal people during the years covered, 1906-1923 (the history that begins before then is covered in limited fashion).

Even though the articles are not focused on doctrine, a lot of their beliefs are revealed in the testimonies, both the Holiness and Pentecostal beliefs. Reading this book is like taking crash course in old-time Pentecostalism! Healing, speaking in tongues, financial miracles, unusual manifestations– it is all here.

Some readers my suspect that I have intentionally picked out all the articles that have visions or dreams in them, but there were so many, I did not include even 50% of those I found; but I did include the most interesting and useful ones, as well as a few simply as examples of what was common.

A few dreams and visions contain information that are actually important for us today, such as the one titled, The Last Great Spiritual Conflict, that predicts great deception coming into the Pentecostal movement– from the inside. This was seen over 110 years ago, therefore, we are living in part of it; and I provide a detailed explanation in a separate book titled, The Last Great Spiritual Conflict: A Vision and Prophecies (coming in 2023). But you can read the vision by itself, with no interpretation, in Volume Two; since it was published in 1916. The only chapter I have written is the final one called Final Observations of Volume Two.

A few really long articles were edited for length because the writer would drift into preaching, or was just not a good writer and used too many words. So, in the interest of including as much of the best stuff as possible, and retaining the interest of the reader, some articles have a few sentences or paragraphs removed, indicated when three dots . . . appear. A few times I include only a paragraph or two from an article because I found the information interesting or useful.