A prophecy in the Old Testament PROVES that the USA is Mystery Babylon. This prophecy is explained in detail in the following article taken from the book, The Fall of Babylon and The Final Antichrist:

There is a prophecy in the book of Zechariah that no one is even trying to interpret. It is a vision the prophet had of a woman placed in a basket with a thin metal cover. I had previously tried to understand this vision without success. Then one day I was watching a video and saw all the pieces being explained to me in a documentary about the most famous woman in American history; she is mounted on a pedestal high in the air, the Statue of Liberty.

Let’s examine the prophecy in detail to see what it shows:

5 Then the angel who was speaking to me came forward and said to me, “Look up and see what is appearing.”

6 I asked, “What is it?” He replied, “It is a basket.” And he added, “This is the iniquity [literally, appearance] of the people throughout the land.”

7 Then the cover of lead was raised, and there in the basket sat a woman! 8 He said, “This is wickedness,” and he pushed her back into the basket and pushed its lead cover down on it.

9 Then I looked up—and there before me were two women, with the wind in their wings! They had wings like those of a stork, and they lifted up the basket between heaven and earth.

10 “Where are they taking the basket?” I asked the angel who was speaking to me.

11 He replied, “To the country of Babylonia [literally, Shinar, a plain of Babylon] to build a house for it. When the house is ready, the basket will be set there in its place.” (Zechariah 5:5-11)

Ok, we know that a woman cannot fit into a basket of this size, which is only a few gallons or liters in size. Therefore, we know this is symbolism. What we have here is:

The metal lid represents the thin metal covering that makes up the body of the statue, which is made of 310 sheets of copper, molded into the shape of a woman. Even the type of metal is significant; the lid is said to be made of lead, which is a soft metal. The metal of the statue, copper, is also a soft metal, though not as soft as lead, but a lot softer than iron.

The question has been asked, then why did it not say, copper? For the same reason it did not say “I saw a great statue.” Dreams and visions do not give direct information, but 99% indirect information, which requires interpretation.

Notice that the woman in a basket is to be lifted up “between heaven and earth.” Lady Liberty is 151 feet tall on a pedestal that is 89 feet tall and built on a larger earthen foundation that is 65 feet tall. This makes the tip of her torch 305 feet in the air, taller than any structure in the Western Hemisphere at its construction, probably the world.

In the final construction as it now stands, there is metal weaving inside the statue, similar to basket weaving. (See photo below; there is also a video on my YT channel, Truth Finder.) 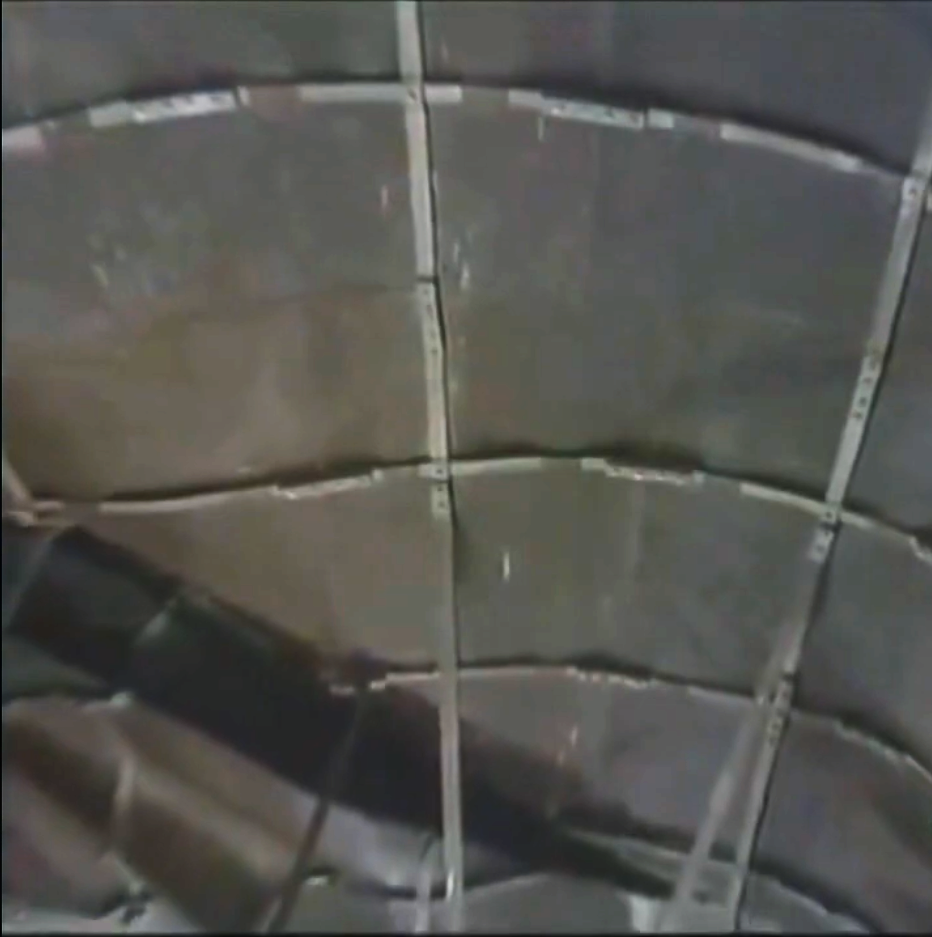 Then I said to the angel who talked with me, “Where are they taking the basket?” 11 He said to me, “To the land of Shinar, to build a house for it. And when this is prepared, they will set the basket down there on its base.” (5:10-11) (ESV)

The Modern English Version (MEV) says, “the basket will be set there on a pedestal.” I was surprised to find the following statement in the notes of The New Oxford Annotated Bible; “On its base, as though the ephah [basket] were an image.” Yes, it is an image, a colossal statue.

This passage says that the woman in a basket is taken to the land of Shinar, “to build a house for it.” This means it is taken to the land of Shinar before the house is built. So, it actually says that the statue will be ready before the base is ready, and that “when this is prepared” then it will be placed on the base. And this is exactly what happened.

Lady Liberty arrived in June of 1885, but the base was not constructed because the funds had not been raised. When the funds were finally raised, the base was built and finished in April of 1886, then the body of the Lady was assembled on the base.

Notice that a house is built for it, but then the wording changes to base or pedestal; “to build a house for it. And when this is prepared, they will set the basket down there on its base.” The concrete foundation covered with earth contains many rooms that house the Statue of Liberty Museum, this is the house. Above the house is the pedestal, so Lady Liberty sits on the base and the house. An astonishing prophecy!

Not all translations read the same as the ESV above, so I consulted many different translations, and the most literal translations, including the KJV, refer to a house and then a base. (See the photo on the next page.)

However, what about the two statements about the woman in a basket being wickedness? Some translations say iniquity. The original Hebrew is difficult to correctly translate. Here are a few other translations of 5:6:

And he said, This is their form in all the earth. LIT

This is their eye in all the land — JPS

This is their aspect in all the land. Young’s Literal Trans. 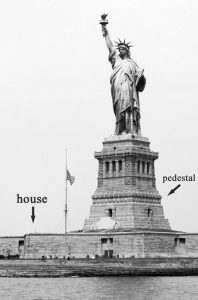 1a1) of physical eye

1a2) as showing mental qualities

1a3) of mental and spiritual faculties (figuratively)

Probably a primitive word; an eye (literally or figuratively); by analogy a fountain (as the eye of the landscape): – affliction, outward appearance, + before, + think best, colour, conceit, + be content, countenance, + displease, eye . . .

Gill’s Bible commentary says, “’this is their eye’ – what they are looking at, and intent upon . . .” However, K&D says, “does not mean the eye, but adspectus [aspect], appearance, or shape.”

Since this is a vision, which is like a dream, it is hard to know how that word should be translated. However, based on the above information, and knowing what the woman in a basket represents, we can more easily ascertain the meaning of the word.

So, it is telling us that the woman represents what is in the mind and thoughts of the people of America, our point of view. What does the Lady represent to us? In one word, Liberty, which is clearly the word that best describes America and all those who come here seeking freedom. It is also the name of the statue.

The final information to note is that the angel made a point of telling Zechariah that the basket was being taken to Shinar, which was a plain in Babylonia. This is absolute proof that America is the Bible’s end-time Babylon.

Lastly, the prophecy proves that the doctrine of the imminent return of Christ is totally false (see BK1) because the end could never arrive before this prophecy was fulfilled; that is, before the Statue of Liberty was constructed.

(2) The Future Destruction of the Statue of Liberty

A poem mounted inside the base of Lady Liberty, written by Emma Lazarus, is titled, “The New Colossus.” The original Colossus of Rhodes was a similar large statue in the Greek harbor of Rhodes. It stood 110 feet tall for 56 years, then it was felled by an earthquake in 226 B.C. Even so, people continued to travel long distances for centuries to see the fallen Colossus.

About 1500 years ago, before the end of the 5th century, Rabbi Pinhas lived in the village of Baram in upper Galilee. He was known as a holy man; his wife, Rachel, was also devoted to God, but the couple was childless. After much fasting and prayer, she gave birth to a boy named Nahman. With a crowd of people gathered around the infant, he began speaking, or so the story goes.

The boy reportedly spoke about heaven, 2nd heaven, 3rd heaven, all the way through the 7th heaven, and spoke about the Throne. And when he began to speak about God, his father told him to be quiet; he did not feel that those present were worthy to hear the secrets of heaven. After twelve years of not speaking, the boy’s mother asked the Rabbi to allow the boy to speak. He agreed, as long as he did not speak clearly about the secret things.

The boy then proceeded to give forth five prophecies in a mixture of Hebrew, Aramaic, Arabic, and possibly some Greek, making them very hard to know what they say or what they mean. When he finished, he told his parents that he would soon die. His grave is known to this day under the name Rabbi Nahman “Katofa.”

The prophecies, which are called “The Child’s Prophecy,” were written down and published several times in books over the centuries, such as “Naggid uMetzave” in the 20th century, and included in “Otzar HaMidrashim.” The prophecies have always been thought of as genuine. About 500 years ago, a commentary was written about the prophecies by Rabbi Avrabam Ben Eliezer HaLevi that was recently republished.

As a result of this newly republished commentary, an American Hassidic Jew named R’Yaakov Nathan studied the prophecies. He discovered a way to translate the prophecies, and to understand them. From the 4th prophecy we have these interesting lines:

In all probability, the Statue of Liberty will be destroyed when the huge tsunami of the 2nd Trumpet hits the east coast of the US, which is shortly before the beast rises. The “wicked kingdom” likely refers to Babylon the Great, because the beast of Revelation will not come out of the Abyss until the 5th Trumpet (see BK1).

(Sources for the Jewish child prophecy:

(If these files are ever deleted, I have a copy of the video.)

Now that I have established that Babylon the Great is the USA, what about the belief that the USA was founded as a Christian nation? How can both be true?

In the next few chapters I will show that we were indeed founded as a Christian nation, but I have also shown that BTG only refers to the wicked part of the USA, NOT ALL of it.